Hackney Song Works keeps singing!
Join us in an outdoor room or zoom:
£5 per session

Phone Martina for more details on 07940572648 or email: hackneysongworks@gmail.com

IN NON-COVID TIMES WE USED TO SING HERE: 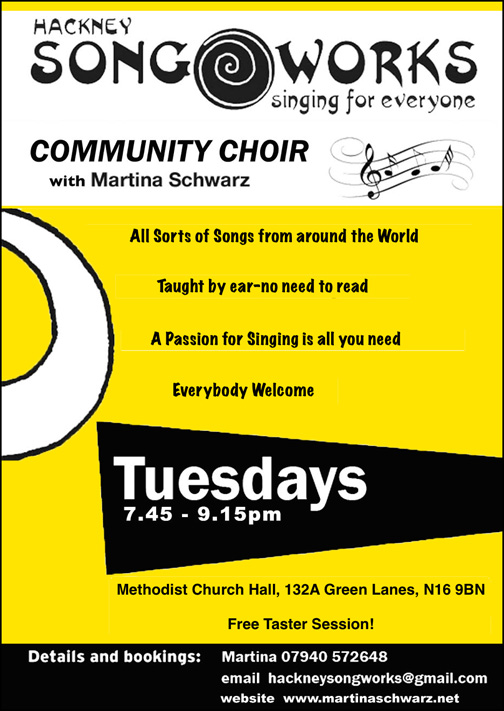 Martina is an associated member of NVPN, Natural Voice Practitioners’ Network, and believes that singing is everybody’s birthright. One of her songs, “The Evening Light”,  features in their recent compilation This Room Sings. Martina’s choral compositions have also been performed at festivals such as The Totally Thames Festival (Sing for Water) and The Big Data Sing (UCL),  in performances at RADA, the London Bubble Theatre and the new factory of the eccentric actor.

She has been a regular at Unicorn voice camp for over a decade where she leads singing and the circle dance band. She has led bands and singing groups in theatre/dance and community projects and is currently running Hackney Song Works, a community choir in North London, Stoke Newington, on Tuesday nights. She has also been leading the Stapleton Hall Singers and the over 65 Palace Club singers at Chat’s palace. Martina is currently involved in the dance & song project “Unlocking Life” in collaboration with Greencandle Dance Company, funded by Studio 3 Arts in Dagenham/ Barking.

Hackney Song Works gets involved in bigger events like “Sing for Water” and has been part of theatre productions in Conway Hall, the Grant Museum and most recently at the Barbican (see below).

Hackney Song Works will be again performing in Sing for Water, part of the Totally Thames Festival on 13th September 2020. This year the event will take place online.

The choir and singing groups enjoy singing juicy harmonies, funky rounds with foot-tapping rhythms, a repertoire drawing on a broad range of World Music, a bit of Pop as well as Martina’s own arrangements and compositions:

Songs about seasons, songs about trees.
Songs about love, freedom, and peace
From as far as Lapland and the Black Sea
to Africa, France, and Germany
Songs for the heart, songs for the soul
Instrumentals and solos
you can rock, you can roll!

Most songs are sung a cappella, but occasionally Martina accompanies the singing on her accordion. Everybody is welcome to join this friendly community choir, all you need is a desire to sing!

What we’ve been up to so far:

One December we also sang in Kings Cross Station as part of “100 Choirs” and @ Opificium at 119 Green Lanes, London.

The atrocities of war never cease to haunt, and Alice Oswald’s 2011 poem Memorial: An Excavation of the Iliad is one of the more powerful recent meditations on the theme of battle.
Now Oswald’s verse has been adapted for the stage by Australian company Brink Productions, which is bringing the show to the Barbican for its UK premiere between 27 and 30 September 2018. Featuring a score by Jocelyn Pook, the production boasts a community chorus of the same size made up of local choirs including Song Works Choir Hackney.
Read More: The Citizen talks to Martina Schwarz of Song Works about the production

Martina also leads residential singing workshops such as The Wonderful Beast Singers, an enthusiastic amateur choir, culminating in a performance at the Old Walpole Chapel in Suffolk.

“What a privilege and a joy that was.
Martina was pure magic… “(participant’s comment)

The choir enjoys performing in casual settings like the Farmer’s market, other local events, e.g. the Abney Park open day (above) or end of term concerts for friends and family and every so often in bigger events like “Sing for Water”, below, or in more theatrical settings, for example “Memorial“ (27.-30.9.18).

In 2017 Hackney Song Works Choir was again part of  Sing for Water, Totally Thames Festival. Martina was very pleased that her composition “l’eau de l’eau” was featured in the performance.

In 2016 she was thrilled to hear her arrangement of the Russian folk song “Vozle” sung by over 500 singers.

Vozle-Ryetshki  Listen to Martina’s choir arrangement of this Russian song: 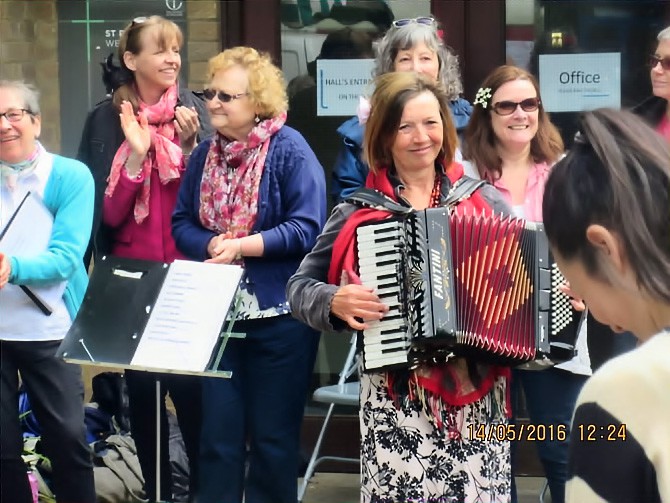 Email or phone Martina if you have any questions: 07940 572648   schwarzmartina@hotmail.com 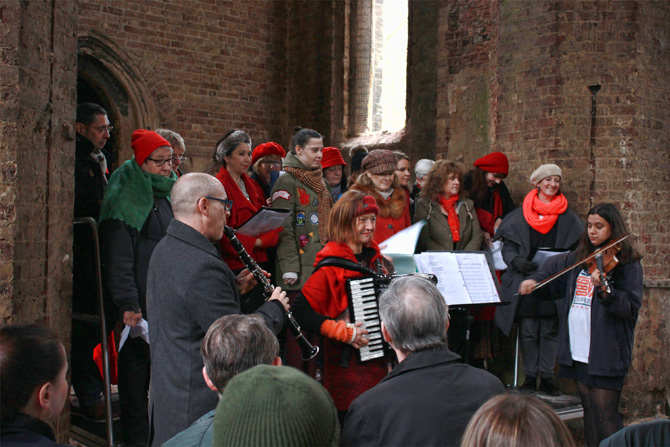 Donations were given to North London Action for the Homeless

Martina was commissioned to write a cycle of songs for this interactive and innovative event, performed by a scratch choir at the Grant museum. Songs include ‘Big Data’, ‘Love Bytes’ and ‘Stored up in a cloud’ 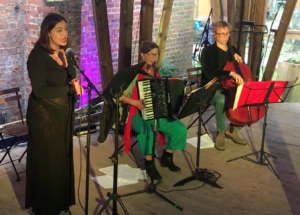 May 2021: The first wedding engagement since lockdown – and no screen between us. It’s wonderful to be playing in the flesh.

April: “Stone Soup”, short film with original music by Martina Schwarz, is a retelling of the classic European folktale by puppeteer & artist Bronia Evers. Watch it on the Little Angel Theatre YouTube channel.